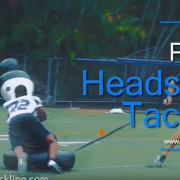 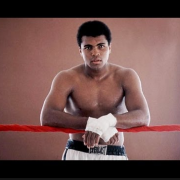 It’s been a fantastic football season, and I can’t believe Super Bowl week is upon us. While I will be sad to say goodbye to the 2016 / 2017 football season, I am looking forward to a break from these weekly posts and I am sure you are too!

So for the 17th and Final Tip of the week I will keep it short and simply offer a quote from the late, great Muhammed Ali…

“There’s only one way to cultivate the heart quality, and that is to become more and more selfless, not selfish, but selfless!”

See you next season!

As a quick reminder, the book Tackling Dummies is now available at Books and Books in Coral Gables, FL and other S. Florida locations. The book signing event on February 2, 2017 was a huge success and we raised over $1,000 to help Miami Palmetto Football provide more financial assistance to football players looking for more exposure to colleges and universities.

To learn more about how to improve both the sport and culture of American Football, check out Tackling Dummies, Playing Amateur Football Smarter! 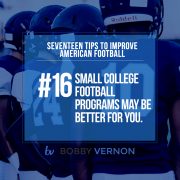 Tip #16 – A small college football program may in fact be better for you.

There are currently 128 Division 1 football programs in the U.S. These are the teams seen on television each week, playing in games that often draw more than 100,000 fans to their stadiums. These programs are worth millions to their universities in revenue and marketing. If you are one of the top 2,500 or so high school prospects in the country and have maintained a minimum grade point average of 2.3 (a C+), you will more than likely be offered several football scholarships to attend one of these schools.

Becoming one of these top high school prospects is extremely difficult, though, and as discussed, once you get to the university, football becomes a full-time job requiring more than forty hours per week and leaving very little time for education or anything else. Yet, even in the face of these facts—that football becomes a full-time job, and there’s a good chance you’ll never actually receive a useful college education or degree—players, parents, and their coaches look upon the Division 1 college football experience as the gold standard.

For most players, there is a better way, a way to continue to play football and achieve a meaningful college education—not to mention a rewarding college experience that includes friends, clubs, and activities outside of football. Many people don’t know this, but there are lots of smaller college football programs at the Division 1AA, Division 2, and Division 3 levels.

To learn more about college football programs and how to improve both the sport and culture of American Football, check out Tackling Dummies, Playing Amateur Football Smarter!

Please share these tips with coaches, parents, players, and any fan of the game! 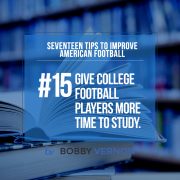 Tip #15 – Big Time college football programs need to give their players more time to get a proper education.

The real reason that big time college football players are not receiving the education they are promised is a very simple one: time. There isn’t enough of it.

Many college football players have less college preparation than average students. They are operating at a deficit from the start. Then, these players are expected to spend the majority of their working hours practicing or studying football. According to Brad Wolverton’s 2008 article in The Chronicle of Higher Education, an NCAA study found that college football players spend on average 44.8 hours per week on their sport. This includes film study, training-room time, and “voluntary” workouts. How is a student athlete playing football supposed to pursue a meaningful education when he already spends more time on football than most people do on their full-time jobs?

So, what needs to be done? Understanding the tremendous time demands on football players, the NCAA should allow universities to offer its football players an additional two years of full scholarship (tuition, room, board, fees, healthcare, tutoring, etc.) to be used exclusively for academic study. By doing this, the NCAA and its member universities would accomplish several things.

First, the argument that players are exploited would be diminished greatly as the athletes would now have every opportunity to secure meaningful college degrees that would serve them for their entire lives.

Second, this would go a long way toward silencing those who propose paying players, a solution that provides only a limited, short-term financial benefit and threatens the amateur status of the sport, a trait central to its popularity.

Third, it would provide an answer to critics who point to low academic achievement among college football players as a way of questioning football’s place in institutions of higher learning.

To learn more about how to improve both the sport and culture of American Football, check out Tackling Dummies, Playing Amateur Football Smarter!

Please share these tips with coaches, parents, players, and any fan of the game!

Thanks for signing up!